Six days a week, Orlando Olarte drives his 2006 PT Cruiser less than a half mile to his insurance office in the San Fernando Valley.

Wearing his infamous fedora, the 78-year-old gets to his small, two desk office at 9 a.m. and works until 7 p.m.

A self-made man, Olarte immigrated to the United States in the late 70s. He runs a successful insurance business now, but this was not something Olarte could have envisioned for himself in high school.

“The only problem in my country [was] you know, unemployment,” Olarte said. “It’s very hard to find a job. When I finished my high school, I was thinking to go into engineering but gosh, it was impossible. I went to the test and everything, but who’s going to support me? So I had to do something.”

Along with high unemployment in Peru, financial pressure from Olarte’s family forced him to pursue a stable job that wasn’t necessarily his dream.

After working for the police force for a few years, he became a land surveyor. Starting in the Amazon jungle, he prepared land for oil extraction.

“Working in the jungle for the oil exploration was very special work, because you have to go to the wild forest, there’s no people in there, totally wild,” Olarte said. His work took him to far-flung places like the island of Malta and the Sahara desert.

In between contracts, he decided to take some time to visit his family in California. Olarte’s sister, a real estate agent, encouraged him to buy a home in Los Angeles.

“She said ‘don’t be stupid, you know for investment.’” Olarte recalled. “So, you know, we buy the house that we are [in] right now.”

Olarte rented out the home while he lived abroad. After one work assignment in the world’s largest desert, Olarte received a year of vacation. He decided to spend his time in California, near his family.

The world traveler had many new experiences in the United States.

This new lifestyle inspired Olarte to work towards citizenship, with the support of his employer.

“Luckily, later on for me, it came so easy. I mean so easy, I didn’t have to do nothing,” Olarte said.

Leaving the oil company, Olarte decided to try something new, which led to working in the insurance industry. He later opened his own company, World One Insurance Agency, where he mostly has Spanish speaking customers.

“My business is insurance, especially auto, home,” Olarte said. “That’s what I do and I enjoy it.”

After living in America for over 40 years, Olarte said there are things he misses about Peru.

“I would like to be living close to the ocean,” Olarte said. “Because I love seafood. Especially fish and I am not eating fresh fish, for I don’t know. I miss it a lot.”

But the desire to travel and see different parts of the world is still there for Olarte. “I’d rather go to places that I’ve never been, that’s my thinking.”

He admits he’s surprised by how his life turned out. “I am not a businessman, honestly,” Olarte said. “You know there was something there, take it.”

The ideal of hard work started at a young age for Olarte, and has continued to follow him today.

“Well, I am not thinking of retiring because, you know, what will I do?” Olarte said. “When you get older, going home is doing nothing and you get older faster. That’s my idea. I’m not going to be home, forget it. Just to eat and sleep.” 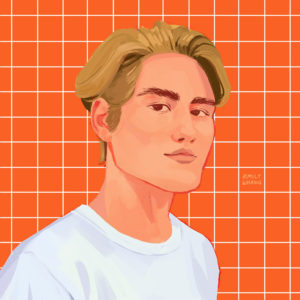 From an early age, Logan Bik always had his camera out, driven to tell a story. Originally from the Sacramento area, Logan moved to the San Fernando Valley in 2017 to pursue a degree in journalism at California State University, Northridge. Logan is focusing on photojournalism, while working as a freelance photographer and videographer, documenting musicians and artists in the greater LA area. Currently the photo editor at CSUN’s campus newspaper The Sundial, Logan plans to continue his career telling visual stories after he graduates in 2021.