A baby blanket, pillow case, and photo album are the only items Gabriela Linares brought with her to the United States. She’s a long way from home but can depend on these treasured pieces to bring back memories of her early life in El Salvador.

Linares is a 24-year-old student at California State University, Northridge. She moved to Sylmar, just outside Los Angeles, when she was 14; the same age her parents were when they had her. While living in El Salvador she was raised by her grandmother, who she calls Mama Sonia.

One of the most shocking things she remembers of her early days in the U.S. is seeing a four-lane freeway for the first time.

The fast roads of California meant she no longer had to take buses or drive for 40 minutes to the nearest Burger King, like she did back in El Salvador.

American food was distinctly different from back home, especially the portion sizes. Linares remembers her first trip to a Japanese restaurant with her mother.

“They bought this big boat of food [with] sushi and meats and stuff like that. And I was like, ‘Wow! We should have this in El Salvador. People will go crazy about it.’ That was the very first shock … just being able to finish the whole boat, the four of us it was … crazy to me.”

But life in a new country wasn’t easy. Since coming to the U.S. at the age of 14, she’s had to adjust to traffic and American culture  — and deal with the language barrier.

When Linares started high school in California she was immediately placed into a class for English language learners. She was able to recognize people who spoke Spanish — like her — by overhearing conversations. Linares recalls trying to make friends with some girls in the school yard, but not everyone was friendly.

“I was like, ‘OK, I’m gonna be friends with them.’ So I walked up to them and [said] ‘Hola, ¿cómo están?’ And I just remember this because … that was the most, I don’t know how to explain it, a cultural shock, in a sense. The girl turned around to me and she goes, ‘We don’t speak Spanish here. We’re in America.’ But then she turned around and she kept talking in Spanish with her friends.”

Although she felt rejected, Linares was able to use the experience  as motivation to keep learning English. She even spoke the language with her family at home.

Another cultural shock Linares faced upon her arrival was how open the LGBTQ community was in the U.S. In El Salvador her grandmother, who is a psychologist, repeatedly denied her sexuality and told her she was “going through a phase.” Now, her grandmother has accepted her orientation as a queer woman. Her parents, on the other hand, weren’t shocked at all. They said:

“ ‘[We] already knew it. We were just waiting on you. It was really obvious. Why didn’t you feel more comfortable with telling us?’ ”

Although the adjustments to life in the U.S. were inevitable, Linares believes the process was easier for her than others. Going to school allowed her to fully submerge herself into the customs of America. She has now adapted to the changes, but still carries her home country’s memories with her. 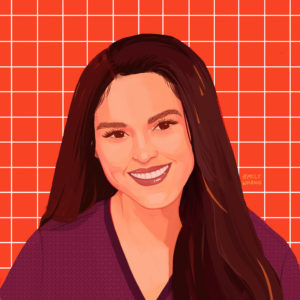 Sofia Gutierrez is a bilingual journalist who is a senior at California State University, Northridge. She’s been able to expand her knowledge of print, radio, and television there. During her time at CSUN, she has been part of the National Association of Hispanic Journalists and was on the school boxing team for two years. She is passionate about health and wellness, sports, music and loves talking about her Mexican culture.

About Next Generation Radio

The Next Generation Radio Project is a week-long digital journalism training project designed to give competitively selected participants, who are interested in radio and journalism, the skills and opportunity to report and produce their own multimedia story. Those chosen for the project are paired with a professional journalist who serves as their mentor.

This edition of the NextGen project was produced at Cal State University Northridge in January 2020.

Our audio engineer is Selena Seay-Reynolds. She is being assisted by PJ Shahamat, a recent graduate of Cal State Northridge.

Our illustrator is Emily Whang, a freelance illustrator based in Southern California. She is being assisted by Joelena Despard, a student at Cal State Northridge.

NPR’s Next Generation Radio program is directed by its founder, Doug Mitchell.